Alarmingly high numbers of obesity and chronic disease in children are causing a stir across the nation. There are a number of debated environmental factors at play, but it’s important to remember that food habits start at home and are often carried into adulthood. So what can families do to instill healthy habits in their children from a young age? Here are 4 strategies to promote health in kids.

Image via The Moat Blog

1) Slowly savor family dinners. We all know better than to scarf down our food, but according to this study, all it takes is an extra 3-5 minutes at the table! According to the research, children of families that interacted over a 20-minute meal, 4 times a week, weighed significantly less than children that left the table after just 15-17 minutes of mealtime. Echoing the importance of family meals, Phipps Conservatory executive director Richard Piacentini has launched a “10,000 Tables” initiative, in an effort to promote 10,000 Pittsburg area families to share a meal together each week.

Image via Best Ads on TV

2) Get moving. Recent research shows that 7 minutes of vigorous activity is all that is needed for children to get the health benefits of exercise (including obesity prevention). Enrolling kids in sports is not only a great way to get in physical activity, but also a great way to teach kids about discipline, teamwork, and goal setting. Limiting screen time and encouraging outdoor play is also a great way to get kids moving. If health motivations aren’t enough, you can read this article about how physically fit children perform better in school than their out of shape peers.

3) Teach kids about food. Involving children in the food preparation process teaches them valuable skills about where their food comes from, and is also a great way to interest them in foods that they otherwise might not try. Expose children to a variety of healthy foods, and remember that it can take multiple exposures to a food before children acquire a taste for it. Children have a knack for intuitive eating, so avoid tampering with their internal cues by enforcing rules such as “clean the plate” or “no second helpings”. It is also important to teach children the difference between a snack (cheese, crackers, fruit, yogurt, or veggies) and a treat (candy and cupcakes). Snacks are mini meals that energize the body, while treats aren’t for eating everyday. “Kid foods” are often just glorified junk food, so model healthy eating behaviors based on wholesome meals and ingredients, and let the food facts come from you, not from marketers. 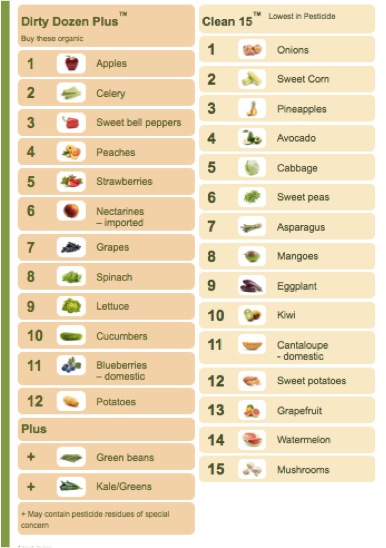 Image via The Environmental Working Group (2012)

4) Avoid toxic exposure. Pesticide exposure to people outside of farms occurs through consumption of nonorganic foods, and chronic exposure is associated health problems including cancer. (Recent publications are even discussing a link between toxins and obesity, although I don’t think that this new stir should downplay the importance of energy balance.) The American Academy of Pediatrics released a report on the benefits of eating organic foods, and although organic products are not significantly different nutritionally, there are times to go organic. Because antibiotic resistant bacteria can spread between people and food, the report indicates a preference for antibiotic free, organic meat. Washing produce reduces some pesticides, but isn’t shown decrease overall exposure. Consult the graphic above (from the Environmental Working Group, 2012) when deciding which fruits and vegetables to buy organic. And don’t think that toxic exposures only come from food. Check out this short article for 5 ways to decrease toxic exposure.

So what do you think? Do you implement any of these habits in your household? Another resource for raising healthy eaters is the book French Kids Eat Everything, by Karen Le Billon. Although I admit that I have not read it yet, I am very intrigued by the 10 rules (see below).

Image via A CUP OF JO

2 thoughts on “4 Habits of Healthy Kids”