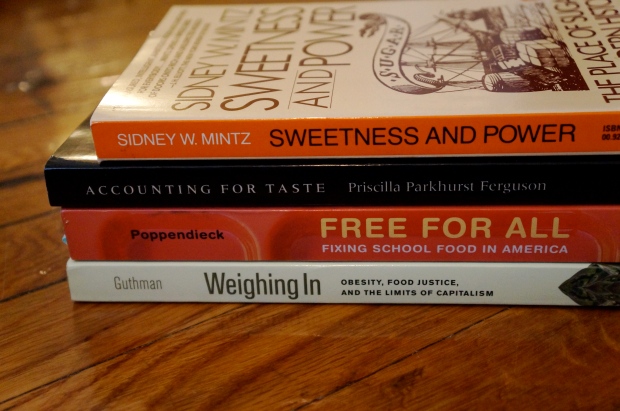 Understanding Food: Theory and Methodology is intended to be the introductory course to the Gastronomy program. The purpose of the course is to introduce Gastronomy students to the landmark works that have influenced food studies, as well as learn the different methods that scholars use to study food. I took it my second semester in the program, because it filled up too quickly during my first semester.

Despite the course being called “Theory and Methodology,” it was much more heavy on theory (particularly social theory) and kind of skimped out on the methods. The class has a reputation for being tedious due to the heavy emphasis on social theorists such as Karl Marx and Pierre Bourdeiu, dense reading list, and rather intense writing component. Despite the dense articles, the books assigned for class (pictured above) were rather enjoyable.

Rachel Black, the director of the Gastronomy program, taught the course. Rachel has a reputation as being a tough grader, but her stories from living in France and Italy during her twenties won over our travel minded and curious class. Rachel stressed the interdisciplinary aspect of gastronomy, and I liked that each class was based on a different branch of food studies (anthropology, nutrition, geography, etc). As an added bonus, our class went to a guest lecture by Janet Poppendieck just one week after reading her book for our class.

This class had the greatest number of assignments I have encountered in the program thus far. We were assigned two short essays, a spotlight presentation, a midterm, a literature review, an outline, a final research paper, and a couple of homework assignments. Despite the tedious reputation of the course, I was pleased with what I learned. The topics covered in this course set a good foundation for the rest of my learning experience, and the required reading was both challenging and enriching. The authors we were introduced to are referenced time and time again in the food world, so it was good to get a handle on the different theories that food scholars draw upon.