As a staunch proponent of whole, unprocessed foods and balanced meals, I’m certainly not a “cleanse” girl. But a two-week cleanse filled with foodie favorites like pork tenderloin, chia pudding, and chocolate bark? Now I’m listening! 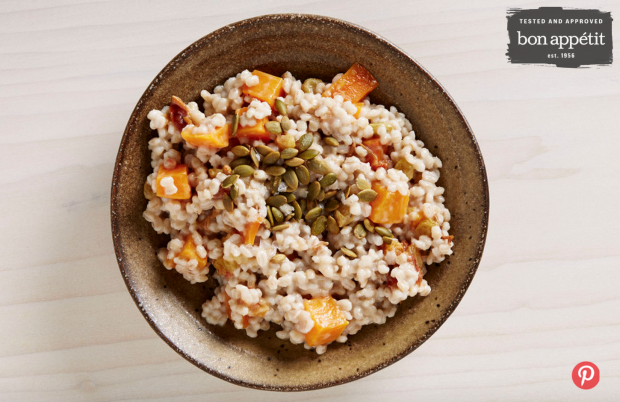 The Food Lover’s Cleanse, dreamed up by the folks at at Bon Appétit, isn’t really a cleanse so much as a boot camp for cooking regularly and getting familiar with some of the lesser-known “superfoods”. Now in it’s fifth year, this creative meal plan demonstrates the growing overlap between nutritious and delicious. I only can’t believe that I’m just now learning about it (thanks to Emily, and her intriguing healthy lunches)!

Even though the 2015 Food Lover’s Cleanse wrapped up in mid-January, you can still access all of the delicious recipes online. Here is a one-page overview of the menu for all two weeks, a printable PDF of all this year’s recipes, and printable shopping list. Prefer to do kitchen prep ahead of time? This is a link to big-batch recipes that are used throughout the cleanse.

While your grocery bill might suffer (superfoods don’t come cheap these days), it really does make sense to follow the menu plan to it’s fullest, as many ingredients are repurposed throughout the cleanse. For example, barley makes an appearance in a dinner pilaf with leeks and lemon, and then is prepared for breakfast the next morning with squash, date, and lemon compote. Similarly, chevre cheese is served alongside a sliced pear as a snack one day, and then shows up in an egg scramble with caramelized onions the next morning. With quality ingredients like these, the attention to waste reduction is much appreciated!

That being said,  if you’re simply looking for nuggets of inspiration to escape your culinary comfort zone, the recipes can also stand alone. Seeing as my grocery budget is pretty maxed out at 2-3 recipes per week, I probably won’t follow the cleanse to a T (at least not this year). However, browsing the menu plan certainly gave me ideas for recipes that I want to make and foods that I want to cook with. Have you tried any recipes from the Bon Appétit Food Lover’s Cleanse? Do tell!