Cooking tomatoes in olive oil, as is traditional in the Mediterranean, increases the absorption of lycopene (an antioxidant known for its role in heart health and prostate health). Across the ocean, in ancient Mesoamerica, corn was soaked in lime to provide niacin, a B vitamin necessary to prevent pellagra. And all over the globe, variations of rice and beans have been eaten for centuries, which have complimentary amino acids that produce a complete source of protein.

As these examples illustrate, traditional cuisines and food pairings have a lot to teach us. This is one of the main reasons why I decided to compliment my nutrition education with a degree in Gastronomy, learning more about culinary traditions and global food cultures.

While there is no reason to toss aside culinary creativity, there is reason to be wary of hyper-processed “Frankenfoods” that have no root in logic or tradition. Dr. David Katz illustrates this caution in a recent article about the rise of gluten sensitivity. 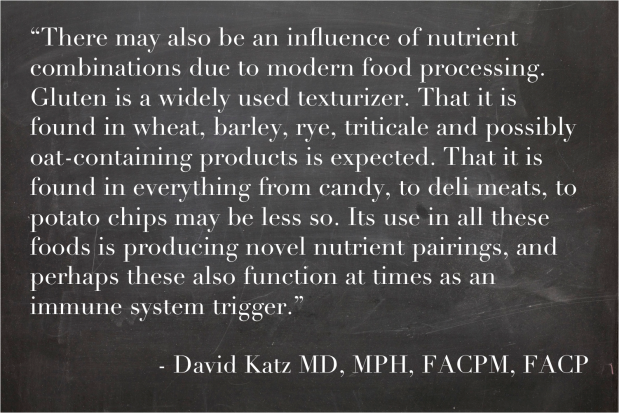 The same could be said not only of gluten, but also of soy and corn products. After all, these ingredients show up in nearly every highly processed food, and often in strange combinations. This point is famously illustrated in The Omnivore’s Dilemma, when Michael Pollan deconstructs a McDonald’s meal to reveal that a shocking number of ingredients—56% of Chicken McNuggets, for example—are derived from corn. Instead of letting food scientists dictate which foods and nutrients belong together, step into the kitchen and let traditional cuisines be your guide.

Packaged foods are easy sources of portable energy and can introduce us to fun flavor combinations. However, even though these processed snacks are increasingly being made from “real” ingredients and claim to offer optimal nutrient combinations, it’s important to remember that the world’s healthiest foods have already been “invented,” and they are growing in fields, farms, and gardens across the world. In The Blue Zones, Dr. Gary Fraser of Loma Linda University and Medical Center states, “what epidemiologists know with certainty about diet and cancer can be stated in a single paragraph. And that would say that consuming fruits and vegetables and whole grains seems to be protective for a wide variety of cancers.”

If you’re looking to eat cleaner and incorporate more whole foods into your diet, the best place to begin is at your local library or bookstore. Pick up a few cookbooks that catch your eye, and start experimenting! Check out the picks on my cookbook shelf below…