I still consider myself a fair weather exerciser, so the main component of my active lifestyle is walking around the city (including to and from work). Unfortunately, although many of my dress shoes are quite comfortable, they just can’t take five miles a day on the Boston sidewalks. Thus, I’ve finally resorted to wearing commuter shoes. This puts less wear and tear on my fancy footwear. Plus, I’m motivated to get more steps in, since tennies are so darn walkable! 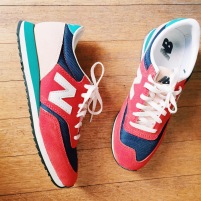 Luckily, sneakers don’t have to scream goofy American tourist. In fact, when done right (see photos above) they can actually look quite chic. My trusty mint green Keds are filthy beyond repair (note to self: Scotchguard the next pair), so I splurged this red pair of New Balance kicks from J. Crew to achieve that urban-chic/woman-on-the-go look captured in the photos above.

If you’re in the market for new commuter shoes, check out a dozen of my favorites below. They’re perfect for springtime strolls!

Which pair is your favorite?

P.S. I love my Toms, but they’re just not a practical option for walking around the city, as I tend to bust through the heel after less than ten wears.

Over ten years ago, Morgan Spurlock comically captured the dangers of eating too much fast food in his seminal 2004 documentary, Supersize Me. Since then, there has been no shortage of documentaries for those interested in learning more about nutrition and the food system. Overwhelmed by the number of food-centric films on the menu? See below for four of my favorites.

Watch to Learn: Why To Pay Attention to Where Our Food Comes From

If you’re wondering why there’s such a fuss about farmers markets and organic, local food, this must-watch 2009 documentary clears things up. While those unfamiliar with the food movement may be ready to dismiss food system issues as frivolous, this film explores how the choices we make at the grocery store can affect not only our own health and well-being, but the well-being of all the people and animals throughout the food chain. (Note: If you enjoyed Food Inc., and would like to learn more about food justice and issues of farm labor inequality, then check out Food Chains, also available on Netflix.)

A Place at the Table (available on Netflix)

Watch to Learn: Why Hunger and Obesity are Two Sides of the Same Coin

While Food Inc is probably the most well-known food documentary, A Place at the Table is, in my opinion, the most important. This profound 2013 film explains how hunger and obesity are both symptoms of the same problem: poverty and food insecurity. (If you’d like to learn more about this issue, see the blog post I wrote after I first saw this film.)

Watch to Learn: How to Support Kids Struggling with Obesity

Although this new 2015 film doesn’t feature any of the big name narrators or interviews that similar food documentaries include, the message is actually pretty powerful. This documentary follows four obese children, each taking a different approach to get healthy (from team sports, to community groups, to a healthy boarding school). Regardless of the weight loss tactics, what really stood out was how important it is for kids to have someone (be it a parent, coach, or school counselor) advocating for them, and how much this support affects their health and success.

Watch to Learn: How the Industrial Food Industry is Contributing to Childhood Obesity

Focusing on added sugars’ contribution to childhood obesity, this 2013 documentary is somewhat of a cross between Food Inc. and Bite Size. The film explores why today’s food environment is often considered ‘obesogenic’ (full of obesity-inducing triggers and cues) and how our unhealthy, corporate-controlled food system negatively affects kids.

While the films listed above are my favorites in the genre, I have seen a number of other food documentaries (including Forks Over Knives, King Corn, The World According to Monsanto, Inside Chipotle, and Food Matters, among others). The next food film that I’m hoping to watch is Cafeteria Man, an inspiring documentary that chronicles a school lunch success story. What are your favorite food documentaries?