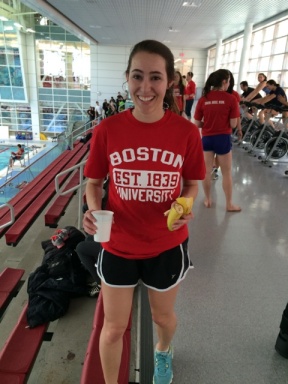 This past weekend, the Boston University Triathlon Team hosted an abbreviated, indoor triathlon event called “Try-A-Triathlon”. The purpose was to introduce people to the sport and to get a feel for transitioning between the various events.

The race consisted of a 200M swim (that’s 8 lengths of the pool), followed by a 15 minute ride on a stationary bike, followed by a 1 mile run around the indoor track. The bike could be set at any resistance that you were comfortable with, and since everyone had to bike for 15 minutes, the swimming and running are were the places to focus your efforts if you were looking to make good time. The race was staggered into 7 heats of about 10 people each, and most swimmers shared a lane (as there were only 5 lanes). In the photo above, you can see the pool to the left and the bikes to the right.

I am not really a swimmer (or a runner, or a cyclist), but the length looked manageable so I signed up willingly. Additionally, I was excited that I could try all of these events in the temperature controlled paradise that is the BU gym. After all, Boston winters don’t make for great triathlon conditions.

“Try-A-Triathalon” seems to be an annual event at BU, so if I’m in the Boston area next year I definitely want to give it another try. Have you ever finished a triathlon?