Having started my elementary school years at a Catholic school in Louisiana, there is something about the Lenten season that makes me crave Cajun foods. From steamy gumbo to crispy catfish, my mouth starts watering for these comforting, Creole morsels before the last bite of King Cake has been finished. Today I’m sharing a recipe for a meatless, budget-friendly (and diet-friendly) recipe that is perfect for Fridays during Lent, and just about everyday in between!

This Red Beans and (Brown) Rice dish requires a bit of prep work and advanced planning (the beans have to soak and boil briefly before you toss them into the slow cooker), but I can assure you that this recipe is still incredibly simple!

Now, you may be asking, why bother to boil the beans? After all, isn’t the point of a slow cooker to eliminate that pesky step? 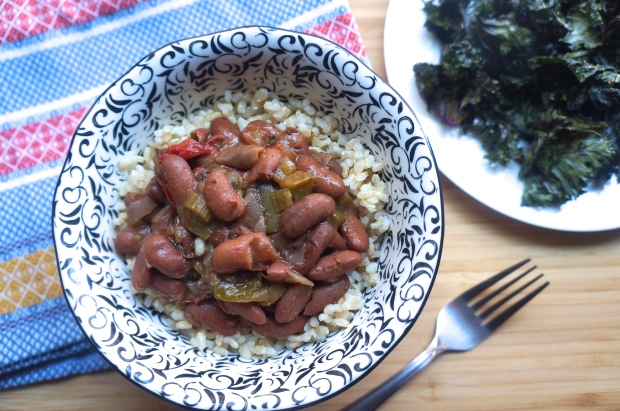 Indeed, most dry beans can be tossed in a slow cooker and cook beautifully, but red kidney beans are a special case. Undercooked red beans contain a toxin, so you must boil them for at least 10 minutes before you put them in the slow cooker. Note: this is a prime example of why it’s important to get recipes from reputable sources that have been trained in food safety (such as yours truly)!

Once your beans have gotten a head start on the stove, the slow cooker will soften the beans and develop the flavors of the dish. The familiar southern aroma comes not only from the seasoning, but also from the onion, celery, and green bell peppers (the “Holy Trinity” of Cajun cuisine).

Rice is a namesake component of Red Beans and Rice, but feel free to get creative with your grain base. Personally, I think a combination of different whole grains (like barley, quinoa, and farro) would go really well with this recipe. In fact, I was planning to use barley (hulled, not pearled), but my local Whole Foods was out. This hearty, rib-sticking bowl is best served alongside a dark green vegetable, such as kale chips (like I used) or collard greens. 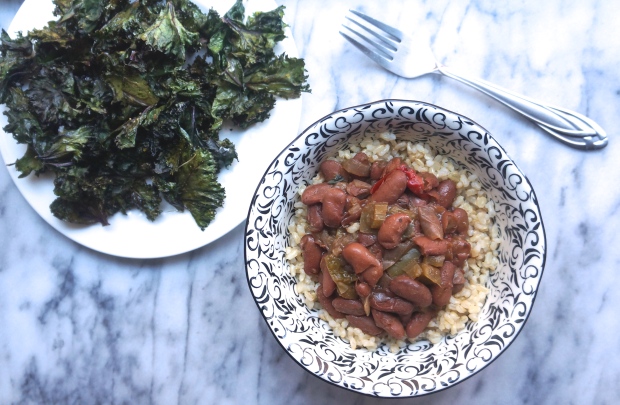 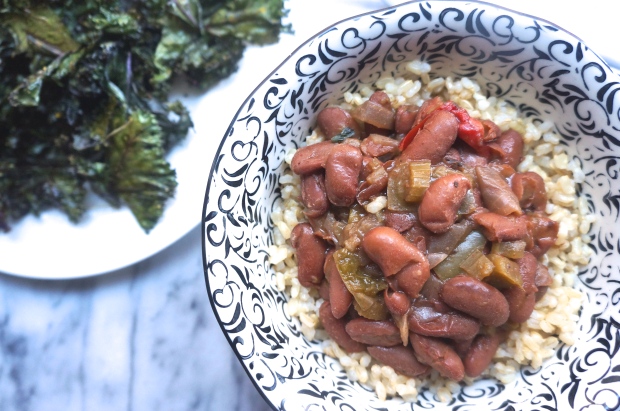 Creamy brown rice risotto is possible, but you have to know the secret…  Parboiling.

Basically, the trick is to boil the brown rice for 15 minutes before you begin the recipe. This gives the rice a nice head start. After all, it has a long way to go to get from nutty and chewy to tender and creamy. Don’t be fooled, risotto is still a sweat-inducing labor of love! But if you have ever wanted a healthy whole grain version (and I hope you have!), it is actually quite easier than you think.

Staying true to the season, pumpkin is the star here. Not only does it give this recipe a punch of autumn goodness, it also lends a velvety, milky texture to the risotto. I used a can, but feel free to use a fresh pumpkin and puree it yourself! As for the veggies, the mushrooms and spinach were a no-brainer, but the zucchini was a fun little addition that I threw in after coming across this recipe. After all, when it comes to vegetables, the more the merrier.

This recipe is hearty, healthy, and completely filling! For a little protein boost, I recommend topping with a poached egg (6g protein), or serving alongside a simply prepared fillet of fish, such as sole (11g protein for a 3 oz fillet), or a rotisserie chicken (23g protein for 3 oz of chicken breast). 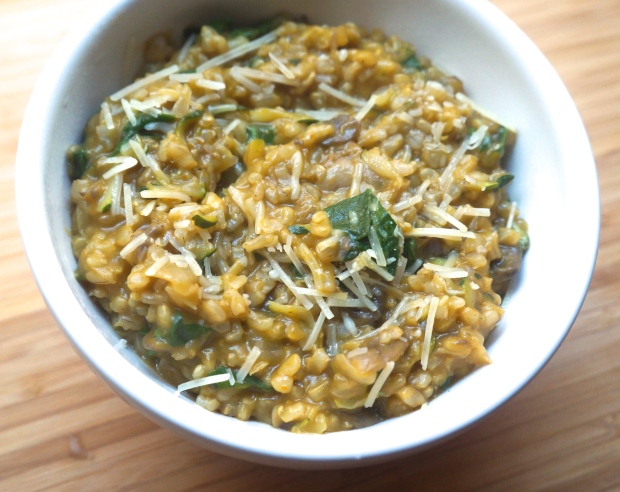 (Inspired by this pumpkin risotto & this zucchini risotto) 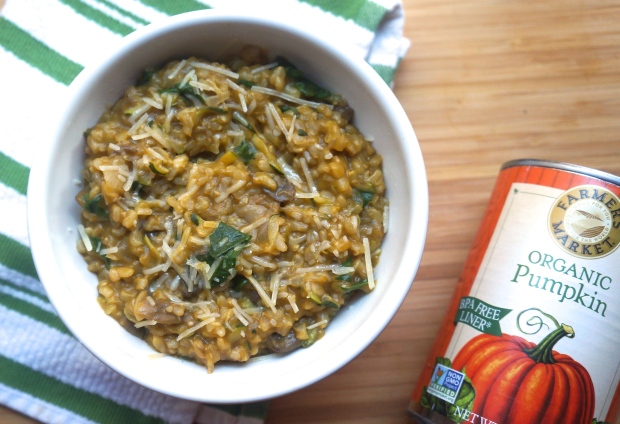 In light of recent arsenic scares, the Consumers Union recommends no more than 1/4 cup rice (dry) two times per week for adults, and 1.25 times per week for children. (This recommendation applies both to brown rice and white rice.) Do you rely on rice as a dietary staple? If so, this is the perfect time to branch out and try other grains. Out of all of the grains available, I find that farro, barley, and quinoa are the most “rice-like” and work best as rice substitutes.

Farro: Farro is an ancient strain of wheat (meaning it’s not gluten-free, for any allergy folks out there) and the grains are a tad larger than rice. Farro has a chewy texture and nutty flavor, similar to brown rice, but turned up a few notches. Because of this unique flavor, farro works well as a stand alone side (fish served on a bed of farro, chicken with a side of farro, etc). Also, farro’s texture lends itself well to grain salads. It stays chewy when served cold, unlike rice, which becomes dry and stale. At the grocery store, look for whole farro (rather than pearled farro) to be sure you’re getting a whole grain.

Barley: Barley (wheat free, but not gluten free) is a bit smaller than rice. It has a neutral flavor, so it works great in mixed dishes (such as stir frys). It is also great in soup (think beef with barley!) and works well with beans. Like rice, it is best served warm. Look for whole barley or hulled barley at the grocery store. While pearled barley is more nutrient dense than a fully refined grain, it is not technically a whole grain because part of the bran has been removed.

Quinoa: Quinoa is like the chambray shirt of ancient grains… it goes with everything! Even though quinoa is actually not very “rice-like” compared to farro and barley, this tiny, gluten free pseudograin can be substituted for rice in many recipes. Warm or cold, sweet or savory, quinoa can be whatever you want it be!

When experimenting with a new ingredient, it is often helpful to start with a recipe. Below are some recipe ideas to get you started:

What is your favorite grain to substitute for rice?