One of my recent work projects has involved gathering healthy dessert recipes, so I’ve been immersed in a world of cookbooks that feature fruits, nuts, and whole grains in any manner of clever combinations. (Tough job, but somebody has to do it ;)) While combing through these creations, I was inspired to get a little more creative with dessert than my ritual dark chocolate squares, and try my hand at a healthy, protein-packed cheesecake. 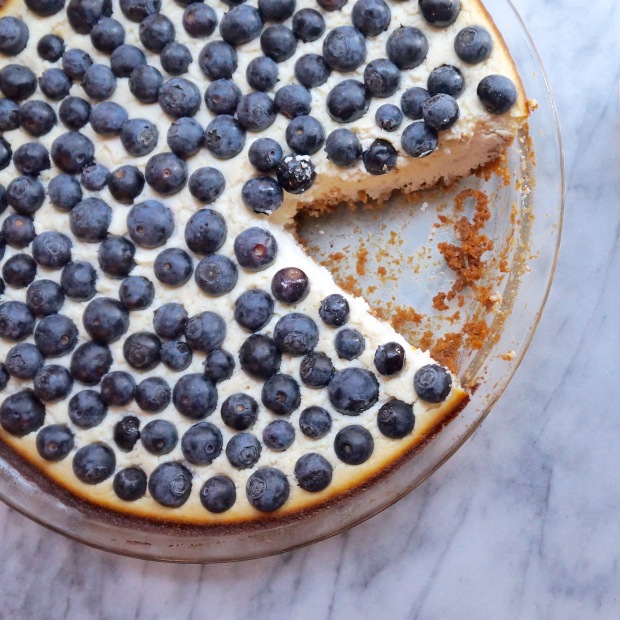 Greek yogurt cheesecake might seem like a contemporary twist, but this dessert is actually adapted from a recipe that is over 40 years old. Indeed, one of my heroes (and former employers), Frances Moore Lappé, published her recipe for “The Thinking Person’s Cheesecake” in her seminal 1971 classic, Diet for a Small Planet (albeit, with regular yogurt, not Greek). My version stays pretty true to the original, resulting in a treat that’s both delectable and refreshing.

A stark contrast to the rich, cumbrous cheesecakes served at chain restaurants across the nation, the texture of this confection is airy and light (a good indicator of how you’re going to feel afterwards). But do be warned… when I say “lightly sweetened,” I mean it! Unlike the granola-laced crust, the sweetening in the actual cheesecake is very subtle (teetering towards undetectable), letting the fresh fruit topping shine against the creamy, tangy backdrop. That being said, for those looking to loosen their dependency on added sugars, I highly recommend that you give the recipe a try as written. Organic blueberries were on sale when I made this, but any fruit will do. And don’t hesitate to load it on – the fruit contributes a welcome, sugary zing. 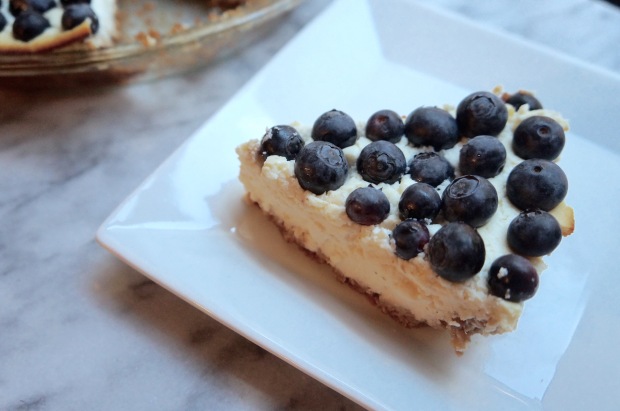 *About 10g added sugars (from honey and granola)

A note on nutrition: I based the nutrition data on 8 standard-sized slices, because I know very few people that would only eat 1/12 of a cheesecake this size. For fewer calories, feel free to serve the cheesecake in smaller portions. For example, if the pie was cut into 10 slices, (instead of 8), each slice would have about 240 calories. If cut into 12 slices, each slice would only have about 200 calories.