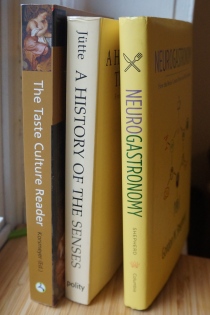 Food and the Senses is one of the 4 required core classes for the Gastronomy program, and is the best one that I’ve taken yet.  Classes always had a small sensory experiment, which included everything from blind taste testing to dark chocolate and red wine pairings to molecular gastronomy demonstrations. The hands-on, scientific aspect of the course was a refreshing change of pace from other classes in the program, which are often very focused in anthropology.

Like most gastronomy courses, the final project was open to pretty much whatever we wanted to study. We just had to write about a food topic and how it related to the senses. I wrote about improving the sensory appeal of vegetables, while my classmates covered topics as diverse as the rise of popularity of comfort food, and the sensory aspects of Jewish culinary traditions.

The class was taught by Netta Davis, who graduated in the first class of the BU Gastronomy program when it was created. From living on a vegetarian commune to working as an assistant to Julia Child to being a food writer in Spain, Netta has an entertaining anecdote for every culinary situation, and has the perfect personality to teach such a hands-on course. Admittedly, I am a little too Type-A for her free spirited teaching style, but I can’t say that I didn’t love the class.