Having started my elementary school years at a Catholic school in Louisiana, there is something about the Lenten season that makes me crave Cajun foods. From steamy gumbo to crispy catfish, my mouth starts watering for these comforting, Creole morsels before the last bite of King Cake has been finished. Today I’m sharing a recipe for a meatless, budget-friendly (and diet-friendly) recipe that is perfect for Fridays during Lent, and just about everyday in between!

This Red Beans and (Brown) Rice dish requires a bit of prep work and advanced planning (the beans have to soak and boil briefly before you toss them into the slow cooker), but I can assure you that this recipe is still incredibly simple!

Now, you may be asking, why bother to boil the beans? After all, isn’t the point of a slow cooker to eliminate that pesky step?

Indeed, most dry beans can be tossed in a slow cooker and cook beautifully, but red kidney beans are a special case. Undercooked red beans contain a toxin, so you must boil them for at least 10 minutes before you put them in the slow cooker. Note: this is a prime example of why it’s important to get recipes from reputable sources that have been trained in food safety (such as yours truly)!

Once your beans have gotten a head start on the stove, the slow cooker will soften the beans and develop the flavors of the dish. The familiar southern aroma comes not only from the seasoning, but also from the onion, celery, and green bell peppers (the “Holy Trinity” of Cajun cuisine).

Rice is a namesake component of Red Beans and Rice, but feel free to get creative with your grain base. Personally, I think a combination of different whole grains (like barley, quinoa, and farro) would go really well with this recipe. In fact, I was planning to use barley (hulled, not pearled), but my local Whole Foods was out. This hearty, rib-sticking bowl is best served alongside a dark green vegetable, such as kale chips (like I used) or collard greens.

Don’t let the name of this recipe fool you. Tart from the cranberries, sweet from the apple cider, and warm and gooey from the slow-cooked steel cut oats, this oatmeal tastes remarkably like cherry cobbler. Don’t ask how I got from cran-apple to cherry (sweet and tart, remember???), just go with it.

Even though this is naturally sweetened steel cut oatmeal we’re talking about, it may even be too rich for breakfast. (But don’t worry, I won’t tell!) I mean, I really can’t overstate the uncanny resemblance between this dish and cherry cobbler.

Regardless of when your hunger strikes, this deliciously fruity porridge will go perfectly with a cold glass of milk, a creamy latte, or a sizeable scoop of vanilla ice cream. I’ll leave the choice up to you!

What if there was a wonderful appliance that you could toss in a bunch of ingredients into before bed, then wake up to a warm, fragrant breakfast? For those without fear of burning the house down, this same gadget could take tough meats from chewy to downright tender, all while you’re at work or out running errands.

Indeed, such an appliance exists. And of course, I’m talking about the slow cooker.

That being said, I hardly use mine either.

This week, however, was a different story. When I stumbled upon the Chai and Pear Oatmeal from The Oatmeal Artist blog, I knew that a few tweaks would make this recipe a great contender for the slow cooker. Steel cut oats take forever to cook compared to their (aptly titled) quick-cooking counterparts, but using the handy, dandy slow cooker means that you don’t have to hover over the stove for half an hour to enjoy the sweet, nutty taste of these delightfully chewy oat pieces. 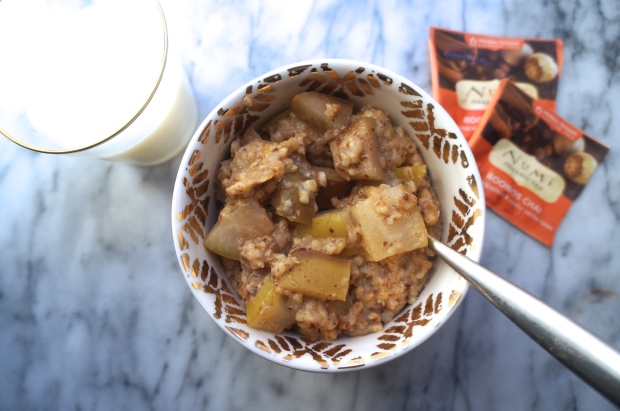 *None are the dangerous added sugars or refined sweeteners

After having so much success making this delicious Apple Cinnamon Steel Cut Oatmeal in the slow cooker, I decided to tweak the recipe and create an overnight pumpkin steel cut oatmeal. Fresh cranberries and chopped pecans round out the fall flavors. 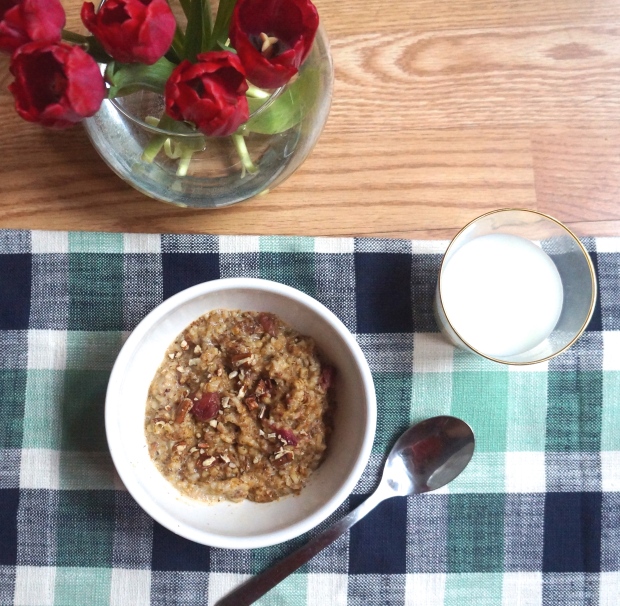 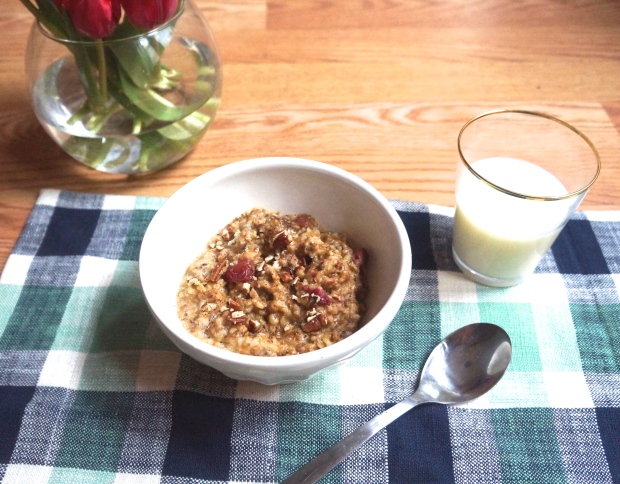 I was first introduced to delicious Brunswick stew at The Brickstore Pub in Decatur, Georgia. This sweet and savory stew is hearty and filling, and the perfect recipe to come home to after a long fall day. I took this recipe and made it extra healthy by increasing the vegetable content and omitting excess sugar and butter. A side salad or kale chips make this a meal! (Mine is pictured with the seeded 7-grain bread from Clear Flour)

Slow Cooker Brunswick Stew, a healthy take on this recipe